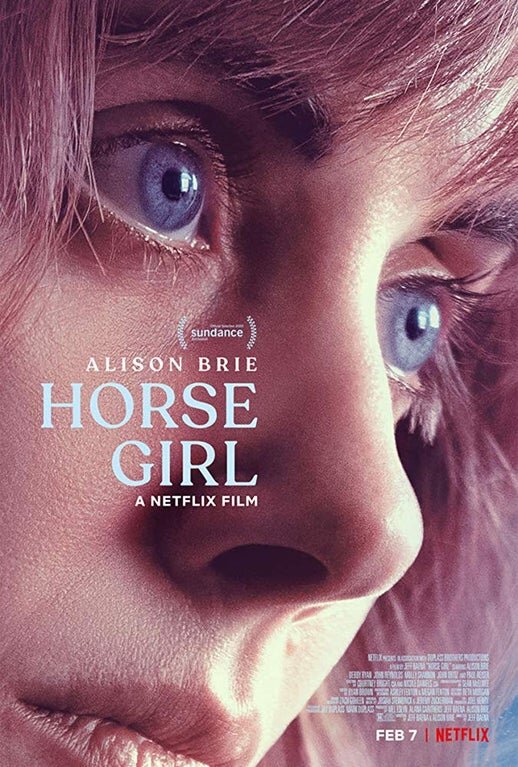 Many films don’t become widely available for months after they premiere, but as streaming continues to become more and more ubiquitous, sometimes that window becomes much shorter. That’s the case for the new Jeff Baena-directed film Horse Girl, a psychological thriller which premiered at Sundance on January 27th and was released on Netflix on February 7th. That’s great news for indie movie fans who can’t wait to get their eyeballs on the buzzy films coming out of the Utah festival.

The movie itself is an odd one, telling the story of Sarah (Alison Brie), a socially insecure young woman who loves crafting and horses more than spending time with her few friends. Things start to get weird when she begins having some vivid and frightening dreams and then finds herself waking up in strange places, unable to remember how she got there. The film also stars Molly Shannon as Sarah’s coworker at the fabric store where she works. John Ortiz and Dylan Gelula play mysterious strangers who begin appearing in Sarah’s dreams.

Duplass Brothers Productions is the company behind Horse Girl, and the film feels like it fits right in with that company’s oeuvre. The film is fairly low key and grounded in reality, even as Sarah’s experiences become stranger and stranger. This dynamic works thanks to Allison Brie, who is absolutely fantastic in this film. As uncomfortable as it is to watch many of Sarah’s social interactions, in Brie’s capable hands, the character is always endearing no matter how questionable her choices become. We’ve rarely seen Alison Brie dressed down and frumpy as she is for most of this movie, and that works in the film’s favor. She is entirely believable as an awkward loner, which plays against what most viewers have come to expect from her.

One thing that sets Horse Girl apart is its humor. Particularly in the first third, there are some big laughs to be found, both from Sarah’s awkwardness and from the minor characters around her. From there the movie holds your attention by slowly unfolding the mystery that defines the rest of the film.

Horse Girl does struggle a bit in its final act. Like many psychological thrillers, we begin to question whether we’re seeing real events or things happening only in Sarah’s head. What’s most interesting is that ultimately the film asks, does it matter? In a key scene with a social worker played by Jay Duplass, he validates Sarah even as he understands she’s likely suffering some kind of mental break. It’s a sly way to make a point about mental health—that writing someone off as crazy is never helpful— and it encourages the viewer to listen and empathize before judging, even in extreme cases like this.

Where the script stumbles a bit is the plot’s ending; the meaning of many of Sarah’s visions becomes entirely inscrutable, and thus feels a bit indulgent and weird for weirdness’ sake. That isn’t to say that many of them aren’t fun to experience, but it feels a bit meandering. There’s also a moment near the end when it seems some plot elements will click into place, but they don’t exactly, and there’s a lack of clarity to the ending that doesn’t feel intentional. Despite that, for moviegoers who enjoy the Duplass’s brand of indie comedy or who are interested in seeing Alison Brie completely nail an unconventional role, Horse Girl is well worth your two hours.