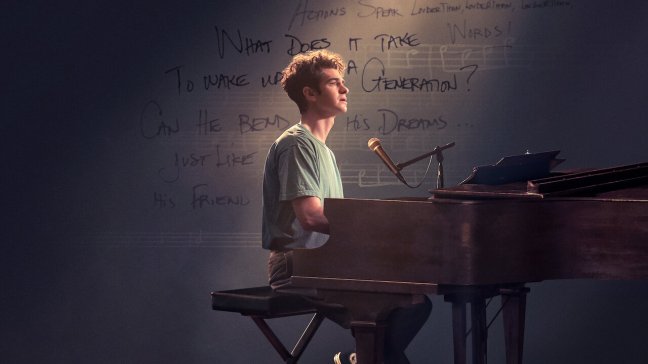 Before Jonathan Larson wrote the Broadway blockbuster Rent, he wrote an autobiographical one-man rock show about his struggles as a composer. That show was later expanded to be a show for three singers and became the musical Tick, Tick. . .Boom!, which has now been made into a glorious movie that will be heaven for musical theater nerds everywhere.

The film, which stars Anderw Garfield as Larson, alternates between square-screen video of Larson’s stage performance and wide-screen flashbacks and musical numbers that flesh out the story. It’s a bit confusing at first – is Garfield’s version of Larson supposed to be the real Larson, a fictional version of Larson, or an altogether fictional character? – but it eventually gels, and director Lin-Manuel Miranda deftly handles the transitions to show how Larson injected his life experiences into his art.

It’s 1990, and Larson is just another struggling artist, or as he jokingly calls himself, “the future of musical theater.” He works at the Moondance Diner, lives in a run-down walk-up, is perpetually broke, and one of his friends is dying of AIDS. He’s been writing a sci-fi musical called Superbia for eight years, and no one wants to produce it. He’s almost 30 years old, and he feels enormous pressure to get Superbia sold before his birthday; after all, his idol, Stephen Sondheim, had West Side Story on Broadway when he was only 27. Thirty looms large in Larson’s mind as the age when you stop being an aspiring artist with a day job and start being a waiter with a musical theater hobby.

Even as Larson struggles, his dancer girlfriend (Alexandra Shipp) wants to leave New York for a teaching job in the Berkshires, and his best friend and roommate (Robin de Jesus) quits acting, lands a cushy job at an advertising agency, and moves into a fancy apartment. Their defections add to Larson’s desperation. He’s so focused on his goal and so self-absorbed that he can’t see the damage he is doing to his relationships, even as he expects their support. Larson eventually gets the chance to stage a workshop of Superbia, but he’s got to pay for the band himself. The producer tells him he needs a new song which he can’t seem to write. His absentee agent hasn’t invited any producers, and his electricity is cut off. Disaster looms.

And yet, while there is a fair amount of pathos in this film (I admit to needing a hankie), it isn’t a downer. There’s a lot of joy, too, particularly in the musical numbers, such as “30/90, “Real Life,” and the clever “Therapy.” The real showstopper, though, is “Sunday,” a tribute to/rip-off of Sondheim’s Sunday in the Park with George, in which the diner’s walls come down and all the patrons are all musical theater luminaries. This number will send musical theater nerds out of their minds. The cast is full of real singers, including Joshua Henry and Vanessa Hudgens, who make the numbers sound great. And what of Andrew Garfield? I usually hate it when non-singers get roles in musicals, but I’m giving Garfield a pass.. His voice is pleasant, he sings on key, he enunciates, his voice is focused and projected, and he manages to hold his own among the other singers.

Best of all, he acts. His performance is the soul of the film. He is alternately charming, exasperating, lovable, and despicable, his emotions on display at all times. His character may be imperfect, but you have to like him anyway. Other standouts are Judith Light as the quintessential agent, Laura Benanti as the leader of a focus group (why doesn’t she sing?), and especially Bradley Whitford as Stephen Sondheim. He does Sondheim’s voice and facial tics to perfection, and you’d swear Sondheim had cloned himself.

There’s a through-line from Sondheim to Larson to Miranda, who actually starred onstage in a revival of Tick, Tick. . .Boom! in 2014. Miranda does a first-rate job in his directorial debut, letting his actors shine and allowing the action to dictate the pacing. There’s a creative scene where Larson gets the idea for a song while swimming in a pool, and the tile lines on the pool’s bottom turn into music staves. And there are Easter eggs galore, such as Larson’s answering machine message, “Speak!” which is the same answering machine message that is used inRent. The editing, by Myron Kerstein and Andrew Weisblum, is terrific, melding the different aspect ratios and shots together into a cohesive whole. For instance, when Hudgens and Shipp sing the tender duet “Come to Your Senses,” they are in different locations, yet they seem as if they are in the same room together.

Tick, Tick. . .Boom! played in theaters for a week, no doubt to qualify for Oscar nominations –  which it may get – and is now streaming on Netflix. Give it a try. You may like it, even if you’re not a theater nerd.