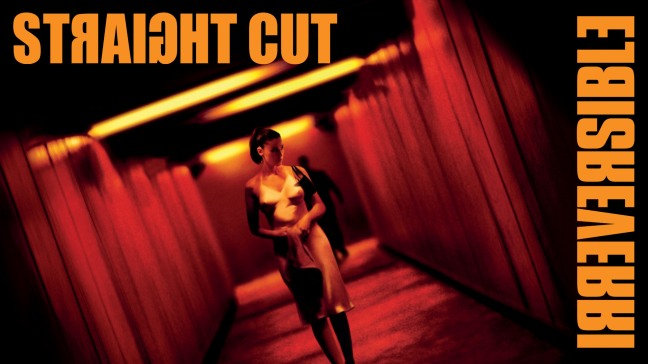 Nearly 20 years after the original film’s release, Noé world premiered IRREVERSIBLE: STRAIGHT CUT at the Venice Film Festival in 2019, and this release marks the U.S. theatrical premiere of his radically revised director’s cut.

Acclaimed filmmaker Gaspar Noé’s unflinching exploration of human savagery and the uncompromising nature of time, IRREVERSIBLE was met with a groundswell of acclaim and uproar upon its premiere at the opening night of Cannes in 2002. Stylish, sexually frank, and brutal, the film’s conceit of exploring the events of one terrible night on the streets of Paris in reverse chronological order was celebrated and derided in equal measure, helping to further cement Noé’s legacy as a cinematic enfant terrible.

Nearly 20 years later, Noé brought IRREVERSIBLE back, world premiering the ‘Straight Cut” at the Venice Film Festival in 2019. This reconfigured vision allowed audiences to see the events of the film unfold in the order in which they occur, providing new context for pivotal scenes of brutality and the subsequent quest for revenge.

Said writer/director Gaspar Noé of his innovative new cut, “Until now, IRREVERSIBLE was a deliberate puzzle. Presented clockwise, everything is clear, and also darker, making it easier to identify with the characters and understand the tale unfolding. The same story is no longer a tragedy, this time it is a drama that brings out the psychology of the characters and the mechanisms that lead some of them to a murderous barbarity. While IRREVERSIBLE has sometimes been wrongly perceived as a ‘rape and revenge’ B movie, here the deadly outcome is all the more depressing. IRREVERSIBLE: STRAIGHT CUT can be more easily seen as a fable on the contagion of barbarity and the command of the reptilian brain over the rational mind. This new cut is another film. You will see. Time reveals all things.”

Now available for the first time theatrically in the U.S., courtesy of Altered Innocence, IRREVERSIBLE: STRAIGHT CUT – along with a restored original version in both digital and a new 35mm print format – provides an opportunity to see Noé’s potent account of humanity at its worst from multiple perspectives, and the unshakable understanding that time, indeed, reveals all things.

Not for the faint of heart, easily offended, or anyone with photosensitivity, this is Noé’s dark masterpiece, now in reverse and ‘re-reversed’ versions. For more information, visit the film’s website.